Undertaking the development of a social network with a small team should not be understated, this has taken a while and it's still only in Beta, however we are proud to announce the launch of Scotland's first Diaspora network KILTR. It's intention is to unite the 10 million Scots and affinity Scots worldwide within a new type of Social network aimed at utilising the warmth, knowledge and good nature of Scots & affinity Scots worldwide for the collective good of the nation.

KILTR also seeks to explore some of the inherant flaws that have emerged over the past few years within most of the major Social networks, they have become far, far to noisy, full of commercialisms and easy tasks like simply adding stuff takes ages. They are in real danger of becoming over engineered and unnecessarily heavy. KILTR seeks to challenge these problems by simplifying functions and providing a neat, clean and easy to use interface.

The 'Concertina' is key, as a navigational device throughout the site allowing pages with a large quantity of content to be organised into bite size chunks of info, letting the end user see, only what's needed in the context of the function they are performing at the time.

Creating posts and adding attachments is easy, a user can attach many pieces of media to a single post, be it documents, video, audio or a gallery full of images. The context of the post can also be shared be it a thought, an update, a question, a job post or an event, all from the post box.

The recipients can also be tailored extensively be it a group, an organisation, selected individuals and privacy is maintained through the use of private and public visibility throughout.

This method of sharing information give huge possibilities within a few clicks, unseen on other networks.

There is still a lot to roll out during the next few months and i'd encourage you to sign up and trial the Beta, let us know what you think, any issues you encounter and any feedback you have so that Everyone and the rest of the KILTR team can help make it better! 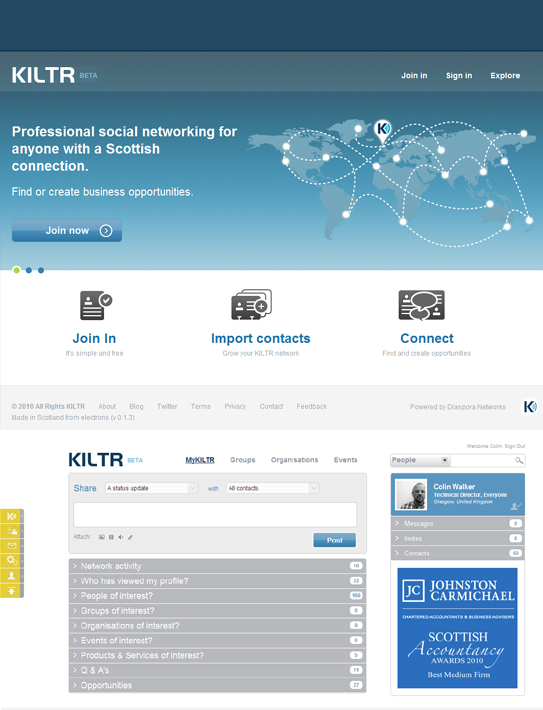